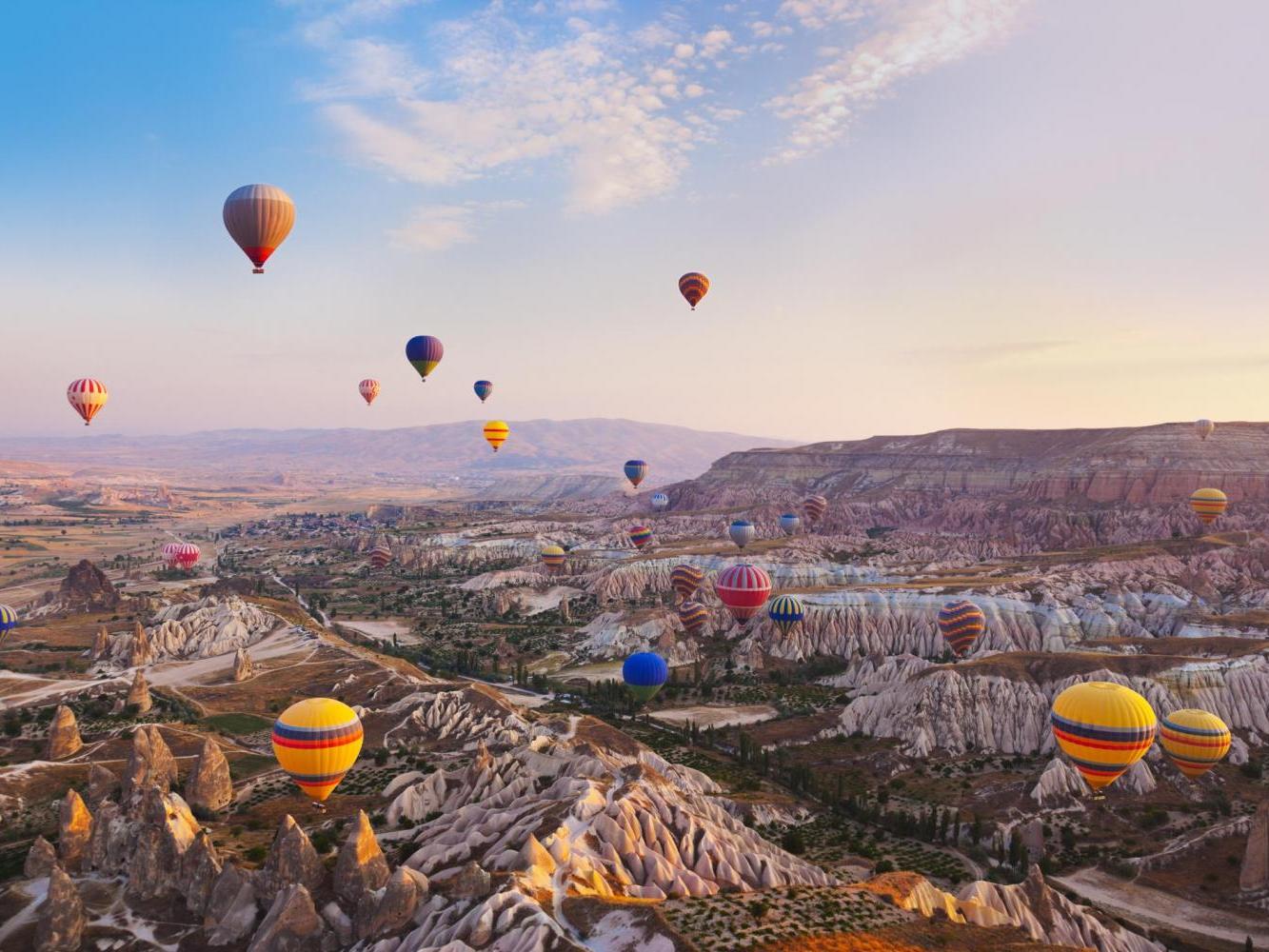 You cannot see the fairy chimneys that are seen in several parts of the world as intensely as anywhere else in Cappadocia. Cappadocia, which ranked 5th in New 25 Wonders of the World ”list published in the Times, has also been on the UNESCO World Cultural Heritage List since 1985.

From the first day you come here, you will realize that Cappadocia, with its nature, history, and legends, melts art, culture, sports, entertainment, and romance into a pot and promises a unique world.

It has such a mystical feel that it is unique geography where you can discover yourself among many other things. Obviously, words are not enough to tell this extraordinary place if you still have to go and see with your own eyes.

Things to do in Cappadocia

In Cappadocia, you can still ride horses in valleys of unmatched beauty from those ages to today, and there is no limit to what you can do from outdoor sports to balloon tours that make the region famous, ski to cross golf and atv.

If you are interested in making pottery, you can learn how to make this craft in the pottery making centers in Avanos and you can have this experience.

Whether you want to come and rent a car yourself, walk with trekking groups, or touring, Cappadocia has at least one event for you.

Cappadocia, Urgup, Goreme, Ortahisar, Uchisar and Avanos with historical values ​​such as regions attract attention. There are many places to visit in these areas.

Kadı Castle in Ürgüp is one of the must-see places. Here you can see important buildings such as Taskin Pasha Mosque, Pink Valley, Urgup Museum, Saint Theodore Church.

You can climb the Zelve Valley, Cavusin and Pasabucagi to see the fairy chimneys up close and enjoy panoramic views of the city from the Uchisar Castle. 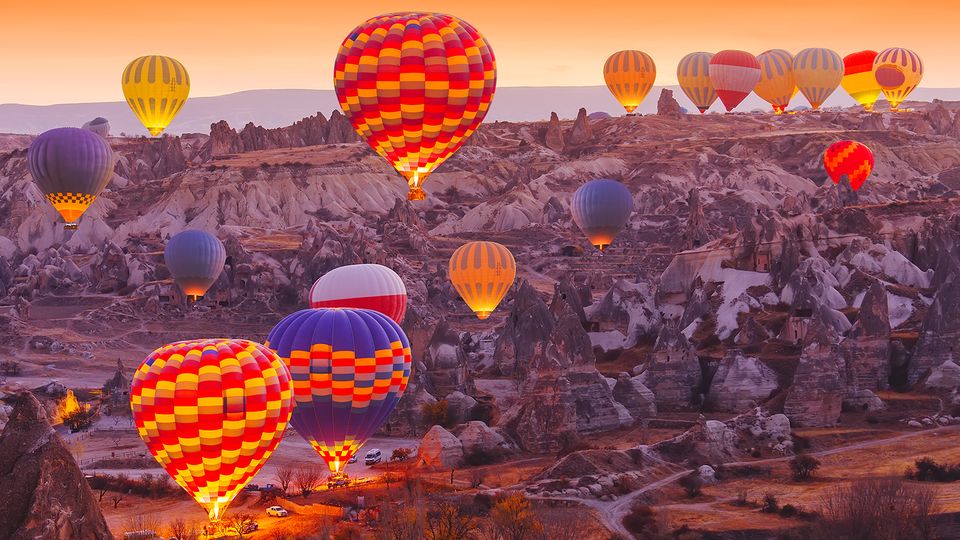 Balloon Tour is one of the most popular activities in Cappadocia in recent years and introduces Cappadocia to the world. On the tour you can watch the unique beauties of the valleys and the region from the sky for an hour, witnessing the sunrise over the clouds and entering the valley into the fairy chimneys.

One of the best things to do in Cappadocia is the balloon tour. Please note that if you want to take part in this tour, it only takes place at sunrise. These hot air balloons, which can reach a height of approximately three thousand meters and generally travel between 50-350 meters, take off according to the weather conditions.

One morning when you wake up in Cappadocia and see the balloons rising to the sky, you accept that this unique landscape belongs to this special geography, whether inside or outside the balloon. So that sometimes you can see hundreds of balloons in the sky at the same time. From time to time in the valleys where I came close enough to touch the fairy chimneys, the whole region was clearly visible until the snowy Mount Hasan and Mount Erciyes in the distance.

On the other hand, naturally, the structure of the valley is also suitable for driving ATV engines. Guided and unguided tours can be done in difficult terrain conditions full of adrenaline and spend hours is not even work. ATV is a sport that everyone can do without having to know how to drive and have a driving license. After a short introduction, a few meters of trial and warm-up, you can explore the valleys.

Trekking is the most popular activity in Cappadocia with its numerous valleys and unusual formations. You can explore the deep canyons and hidden churches on the high hills if you wish with the valley walks where you can observe its unique nature and its geological formations resembling fairy tales. On the other hand, Cappadocia, which has been abandoned for climbing lovers and outdoor sports, has many hidden routes waiting to be discovered except the well-known valleys. 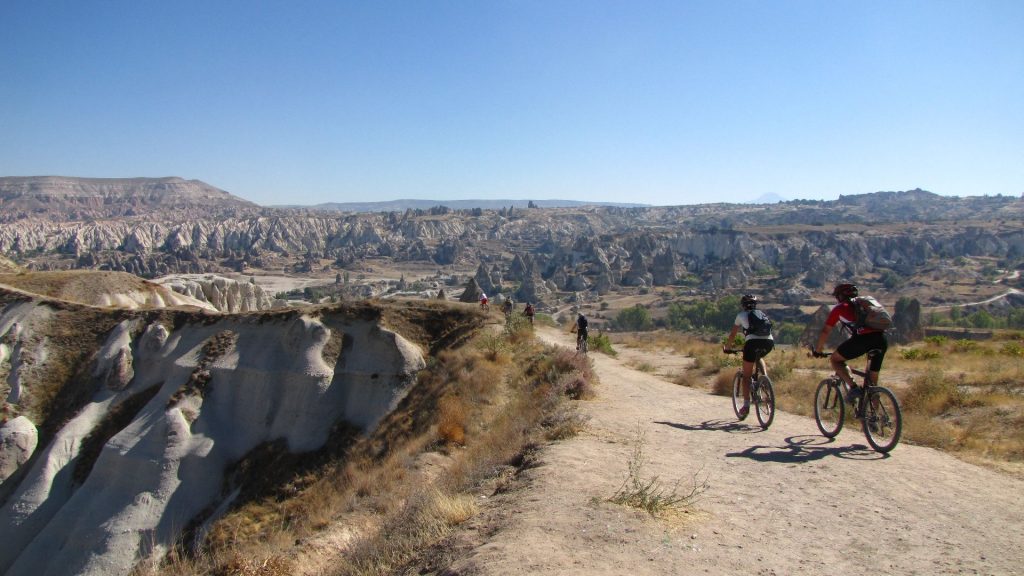 Bike Tour is another pleasant way to visit Cappadocia. The mountainous and rugged Cappadocia, where you can explore by pedaling, also welcomes those who come for mountain biking. Even though the Pancarlik Valley-Ortahisar-Urgup route is the easiest course, you can enjoy nature without disturbing the ecological structure of the region with individual or tours.

Jeep Safari is one of the most exciting adventures in Cappadocia. In Cappadocia, which is very suitable for off-road activities, you can take a daily jeep safari or jeep tours exploring the region’s most beautiful fairy chimney valleys, churches, museums and underground cities in three to four days.

Ideal for adventurers who stay in camps and want to integrate completely with nature under the stars around the campfire at night. With 4 × 4 jeeps, you can use the old dirt roads of Cappadocia and pass through the valleys to see the unreachable areas, churches and special points. In general, adrenaline and nature are intertwined in the activity where you can witness the unique view of the valleys and the redness of the sun in the tours made at sunset or sunrise. 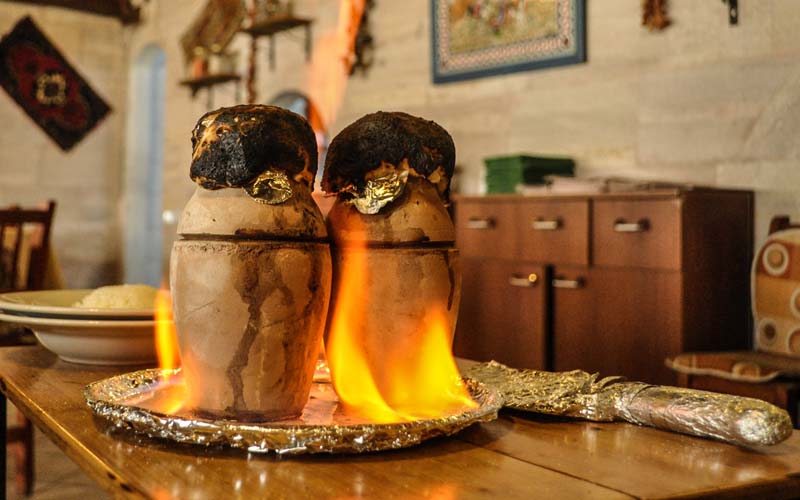 Every region of Turkey is known for its unique food. Cappadocia cuisine is definitely worth a try in this respect. If you want to try the local cuisine while you are in the city, you can taste the local delicacies of Goreme, especially Cappadocia Testi Kebab.

Cappadocia, the land where wine is born in Anatolia, stands out with its tasting and vineyard activities. So much so that famous wine producers are organizing these meetings, which are a special experience for wine enthusiasts, to taste the wines made with grapes produced in the region and to visit the cellars. You are informed about viticulture and production, tasting is done and after dinner, you stay in the beautiful rock carving boutique hotels of the region.

In the vineyard, you can be one of the visitors who flocked to the region at the time of harvest which started in the first days of September, you can pick grapes with your hands and taste the wine varieties. 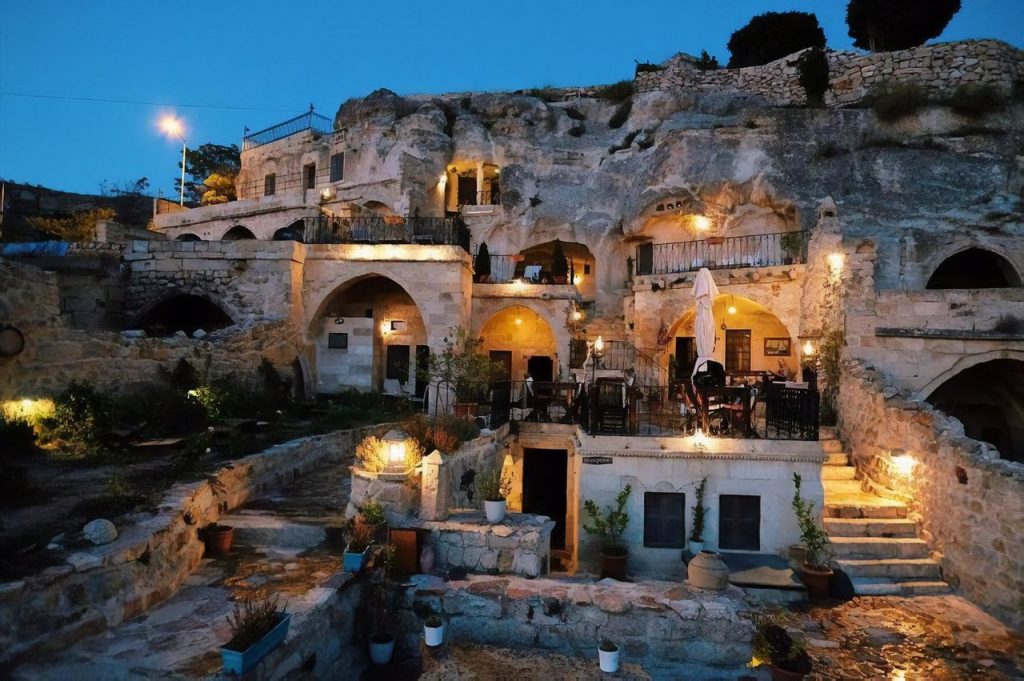 Cappadocia offers an accommodation experience that cannot be found anywhere else in the world. Stay in the boutique hotels, which extend to the hand-carved rocks in the region and welcome guests with their exquisitely decorated intimate rooms.

Do not miss the sunset until you come to Cappadocia. Throughout the year, 20,000 tourists come from all over the world to the beauty of the sunset. You have a lot of choices for sunset in Cappadocia but don’t forget that you should put Kızılçukur Valley at the top of the list!

Especially in Uçhisar and Avanos, Cappadocia Turkish nights are organized to promote Turkish culture and to have fun. You will watch different dances from whirling dervishes to oriental, chapters and folklore in the very large rock carved underground restaurants. While having fun, you will be impressed by the Cappadocian atmosphere of the places as well as the delicious dishes and fine wines of the local cuisine.

10. Sunset in the Kizilcukur Valley

If you enjoy watching the sunset, see it in the Kızılçukur Valley. Definitely an experience you will not want to return from Cappadocia. You can buy wine from the wine houses and enjoy the romance with your partner. 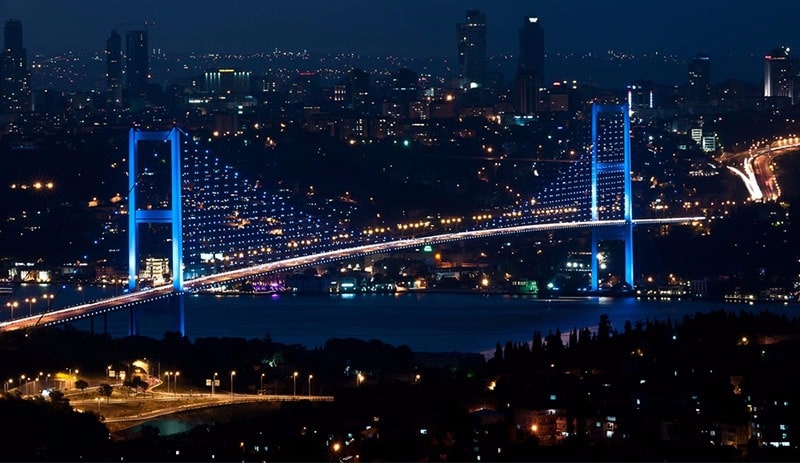 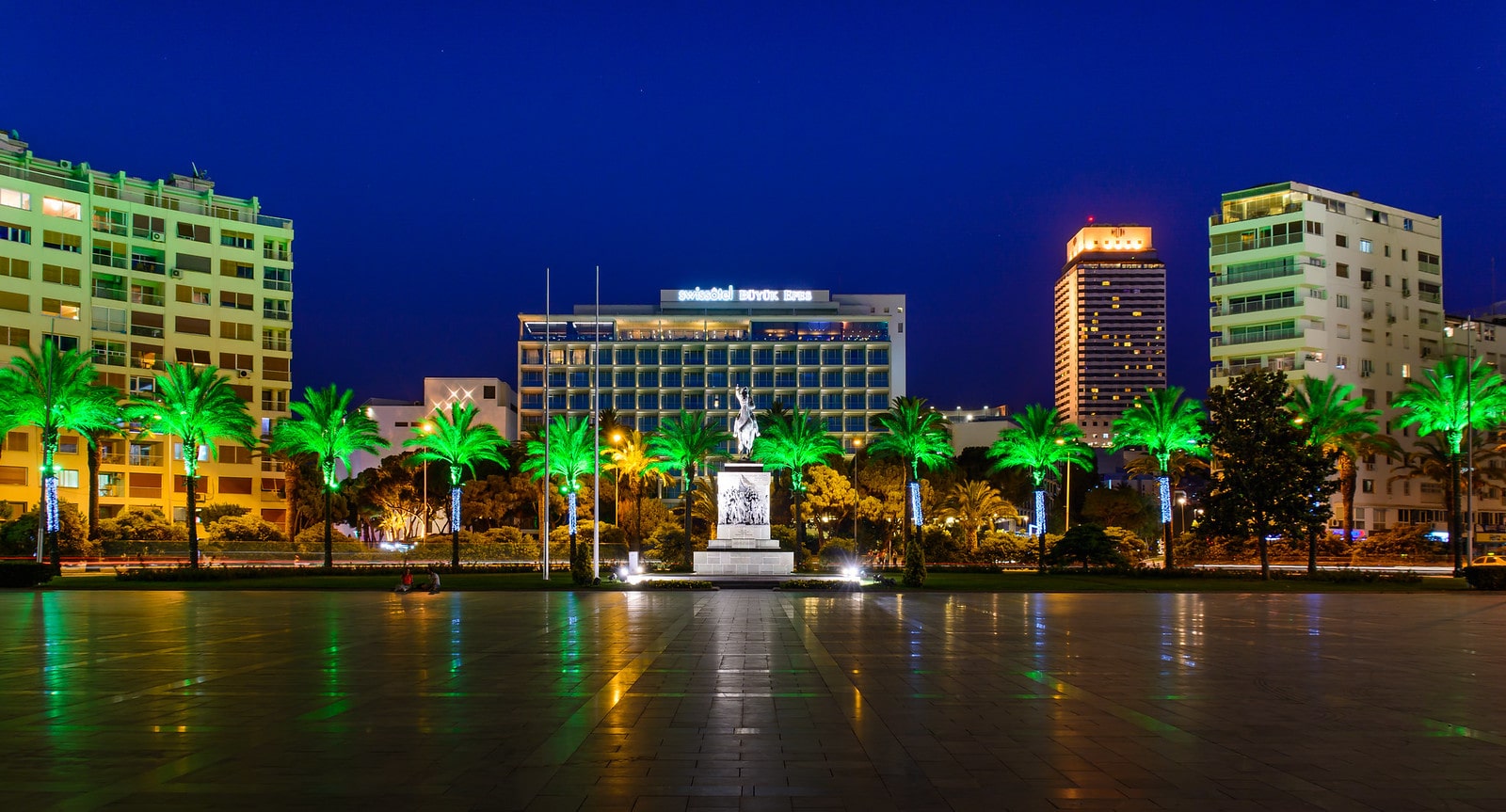 Last Updated:Jul 2, 2019 @ 5:43 pm 1. Clock Tower   Izmir Clock Tower is located in Konak district of Izmir and has a length of 25 meters. It is said that the green and red stones used in the architecture of the building were brought from Ephesus. The clock tower consists of 4 floors…. 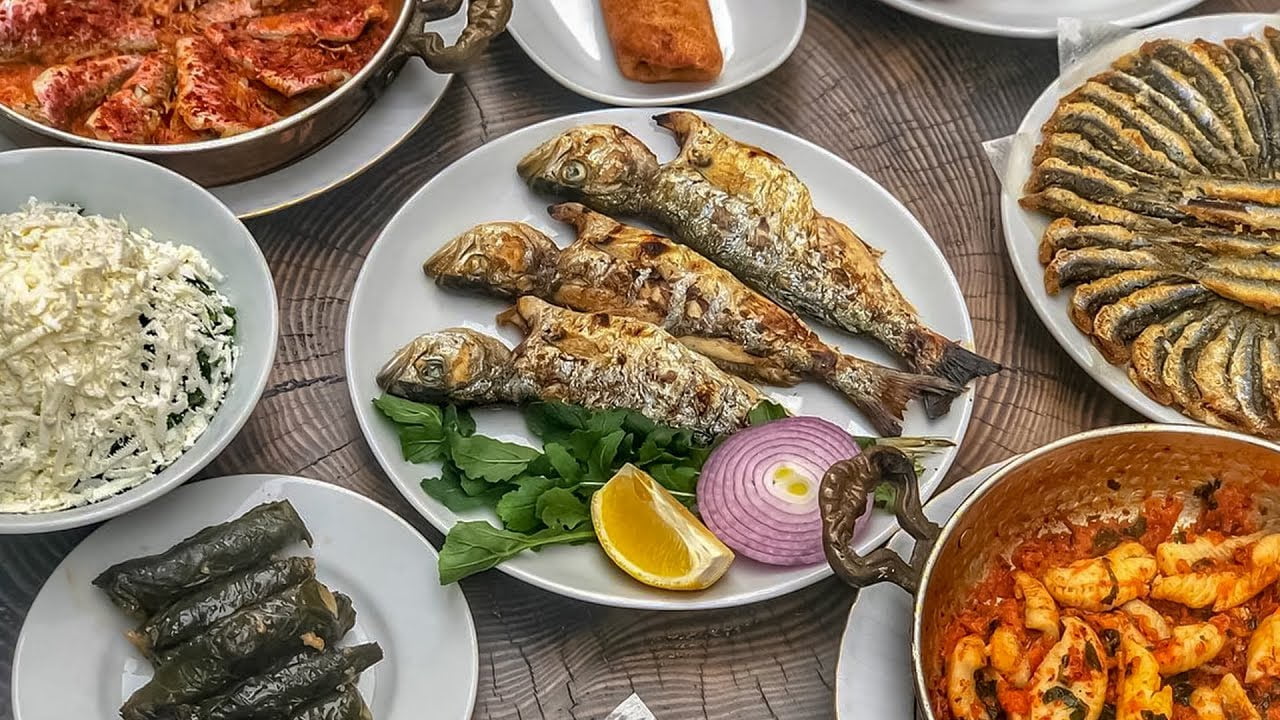 Last Updated:Jun 15, 2019 @ 11:55 am For health reasons, fish is known to be eaten twice a week. If you want to watch the Bosphorus while eating fish or if you want to taste delicious Turkish appetizers, we have compiled the seafood fish restaurants of Istanbul for you. Best Seafood Restaurants in Istanbul Eleos…

Last Updated:Jul 25, 2019 @ 8:17 pm Istanbul is a city where you can discover it again and again by passing through completely different streets every day and at any time. If you want to enjoy the skyline of Istanbul from the best rooftop terraces, while sipping your cocktail, eating your meal or immersing yourself…